The actual building starts for real!

After the long wait for some stuff i could finally start building the prototype. I decided to do it at home. Not in a workshop. No, in a large room at the back of my house. 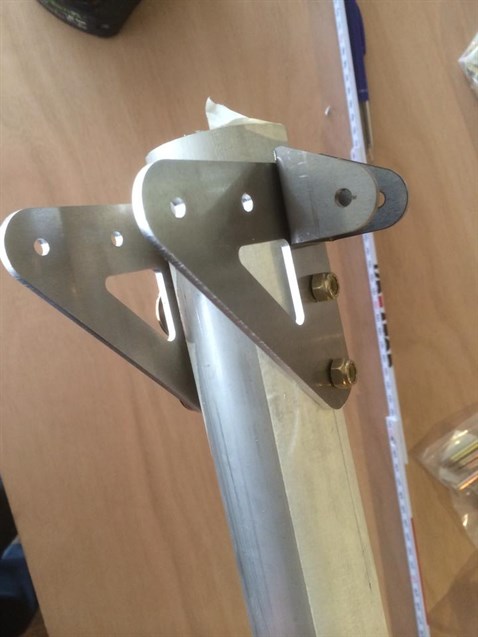 The first holes were done just by a handheld drilling machine. Later i saw that lining up the holes can be tricky, so i started to use my table drilling machine. This part in one of the main tubes of the frame of the fuselage.

It had one hole that was placed at a angle. With a easy to make jig to draw the placement of the hole, i could do it. Man, what i first thought to be a problem was no problem at all. This drilling really really goes faaaast.

Within 4 hours i had this main structure of the fuselage. 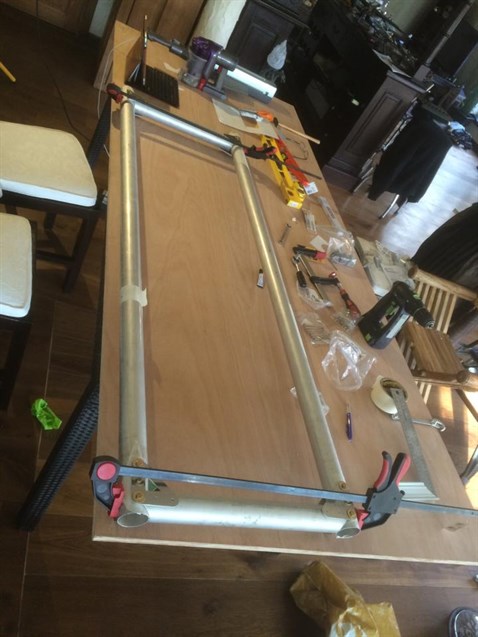 I decided to place it on block to be sure to have no problems installing the vertical tubes. They go lower than this frame base. 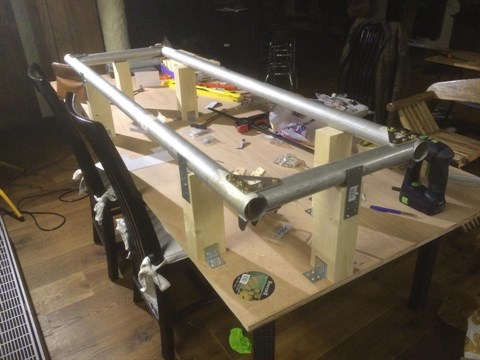 Day one is over. 4 hours work (mostly getting stuff from shop) 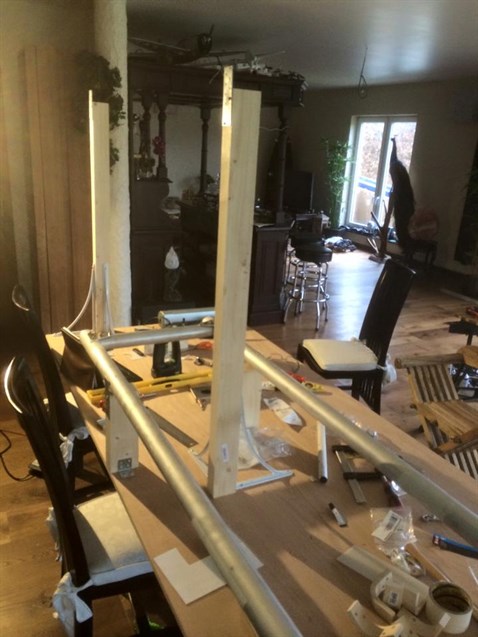 The table gets long arms to hold the upper tube. I used household angles as support, but ...beware ...those are not 90°! I had to use washer to get the angles right. 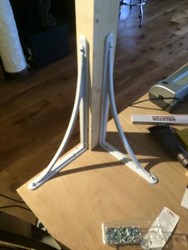 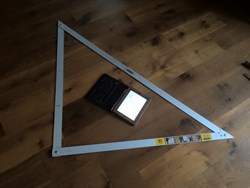 To place the upper tube at the right position i used a angle tool. The traingles is on picture with not my iPhone next to it. No ...that is my iPad. This thing is huuuuge. 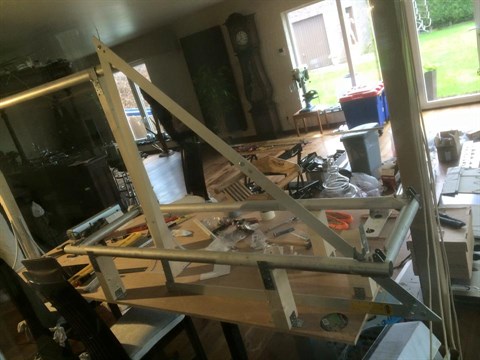 I drew a small line on the table. It labeled the distance from the upper tube beginning with the front of the glider. Using this big angle i was able to see where the tube had to be. I put a mark at the underside of the tube, so i will no need the angle tool any more. 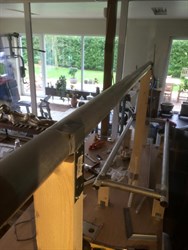 To hold the tube on its place, i used the most famous tool of the Mythbusters. Duct tape. :)

I drilled all the first holes for the plates in the upper tube. I used the plates as templates to drill the other holes.

The plates had to be bend with a very wide radius. It could not be done in the firm that did the other bending. But we found a way to do it. It became clear that not everybody will have these machines. So, the kit will have those plates bend in advance. 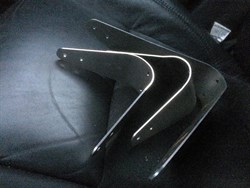 Once the plates are on their place, it is not a hard task to fix the vertical tubes. I could have installed them all that morning, but ...one plate did not have the right dimensions and had to be remade by the laser firm. So, only two sets of vertical tubes could be installed. 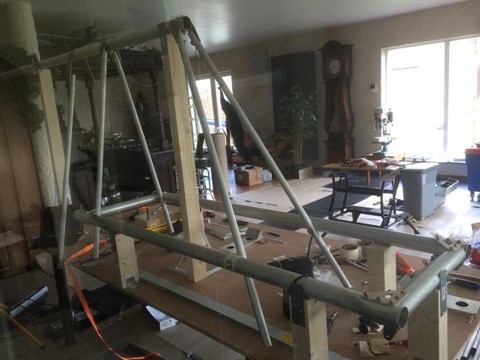 I continued with the pedals. I altered the way of installing them a bit to give the tube that holds the hinges of the pedals more resistance against the forces of the feet. Also ...it would be easier to place the pedals on a different location if the pilot was shorter. 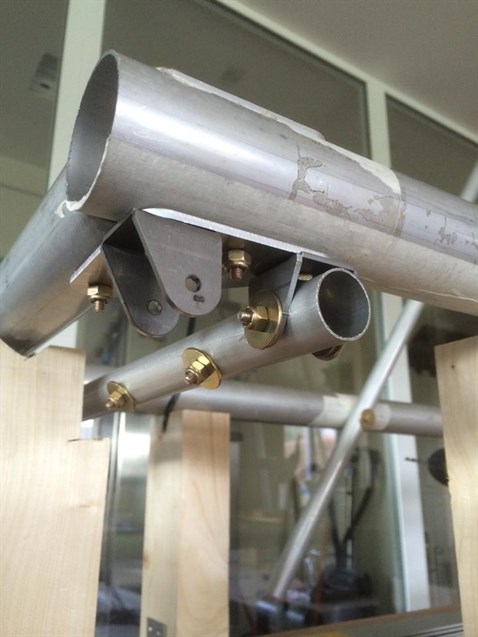 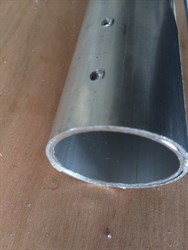 I did a test with a sleeve. Those tubes are placed inside a tube to make it locally stronger. It is a place where a bolt is placed. I really feared this task. I thought that this would end in pushing very very hard to get these sometimes long sleeves into a tube. Well, it were all concerns for nothing. If you just push the sleeve with a tube of the same diameter, it slides easily towards its place. You can mark the needed depth of the sleeve onto the pushing-tube. Once it reach its mark, the placement is exact.

When it comes to the needed holes in the sleeve, it is super easy again. Just use one of the already drilled holes in the outer tube, place a bolt through it. Drill the hole at the other side. Place the bolt steady with a nut. Now the sleeve cannot move. Well ...drill all the other holes now. It took me five minutes to cut, slide and drill the largest sleeve of the upper tube. I guess that i can make and install all sleeves for the entire fuselage in a single day.

Remember, that does also mean that i need to unbolt every tube and install it again. I MAKE A BET ON THIS. I will manage all sleeves on a single weekend day when the fuselage is ready. 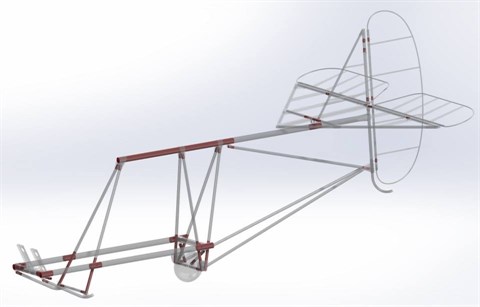 The 3D shows the sleeves in the BirdGlider as red.

I recieved that newly made part. Had it bend again at Tim's. Came back and saw the partly disassembled prototype as i took all three bend plates to Tim's to have the right ones bend a bit more. 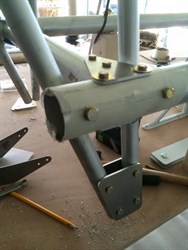 Ok, so i started connecting again. Had to puzzle how the second pair of vertical tubes were placed. Labeled one RIGHT. Drilled the third pair of vertical tubes. I need to remake one tube. Left tube had not the same distance at the bottom to the second pair. So ...i installed the connecting plate at the right side. Was super easy. I used the plate as drilling template at one side. Drilled all four holes at that side only. I drilled a single hole through the tube and installed a bolt to hold both plates. Positioned the outerplate using those other holes, lined up both plates and drilled the holes at the inner plate. Three more bolts. Done. Easy!

Lining up the left side will be harder. Between left and right is the wheel installed. I really want the wheel to line up perfectly straight.

Was able to work some more. One hour in total.

I did use the same tube to replace the badly installed vertical tube and turned it upside down to experiment with a new way of drilling the holes for this tube. Sadly i had no more tube of that diameter and thickness. To be safe i noted a big TO BE REPLACED on the tube. 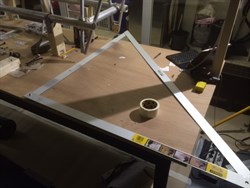 How did i do it this time? Well, i first started with trying to note where i wanted that side plate to be at the left side. I used a angle tool to draw a line on the edge of the table. Then i used that big angle tool to draw that line across the table. At the other side i could use small angle tool to position the side plate in longitudal axis. Now i needed to know the height of the plate. Simply measured at the other side. With these both dimensions i placed the plate and lined it nicely vertical like at the other side. I drilled again the holes at one side, but this time only in the second vertical tube. Now i placed the third vertical tube so it was on the right spot for this side plate. I haven't drilled the connecting hole yet at the frame main tube. That will be the last hole in this process.

Now i drilled the two holes at the outside in the third vertical tube. Now came a task that i didn't know how to do it correctly. I needed to have that first hole at the inside at the first place. The height of that hole depended on the angle i would use with the drilling machine to drill through the tube. What risk did i take? Well, i could line up a bit so i was aiming nicely to the center of the glider, but i had to guess the height. Now ...what could be the possible mistake? The wheel could be a tiny bit angled sideways. But ...it aim would still be straight forward. Working together with Tim Biesemans, who is known for his work in recumbent bikes, i know that this angle does not influence the direction of riding. And a mistake of 0,5 cm at this distance is just a small angle mistake. So ...i took a deep breath and just drilled that hole with full confidence. 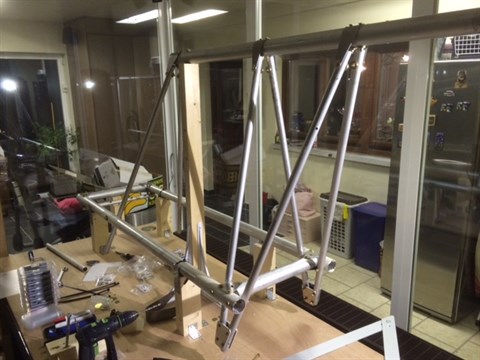 Once i had that hole i lined up the plates again when they were held together by the first bolt through the tube and drilled the missing holes. Those plates are where they should be. Me happy. Now it is time to drill that tricky hole using the holes through the frame main tube. Piece of cake.

Sad part. I noticed that one part was not done at the laser firm. The part i need to install the axle of the wheel. The part where also the support for the tube going further backwards need to be fixed to. So ...i am stuck again.

No worries. Tomorrow i begin with the work for the vertical tube of the vertical tail. But first i need to install all the sleeves in that tube.

Was busy working on vertical tail. But the tube hit the ceiling. So i need to construct a perfect even table ...with short legs. They don't sell tables like that. I guess that this will keep me busy this weekend together with some family stuff. 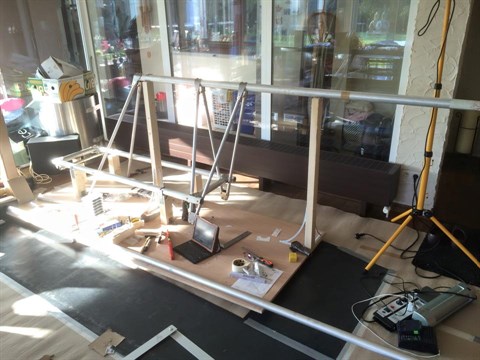 I was pleased to get pictures of the prototype of the seat. It was tested in a playground and it was very comfortable. Also the high position of the feet was no problem. 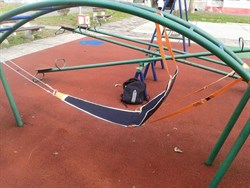 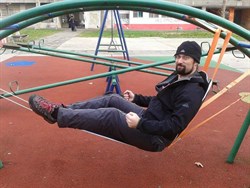 No real hours worked on the prototype. So the amount of working hours stays the same: 8,5 hours. 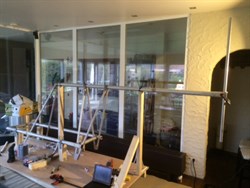 Good news: i finished the transformation of my working plate into a working table. Very short legs and now the vertical tail has some clearance to the ceiling. First reaction of me was: "Lets continue the build-up".

Bad news: i saw that some parts still are missing or have to be bend by me. Those were not possible by the laser firm. I will make my own tools to bend them. A mould for each part seperately. So ...the next days i will be making the parts i need to continue the build-up. I will not share the mould making. Some stuff i keep for myself. All good info for a future builder will be placed here.

Some more good news: about the tail part. I thought that one item would be hard to do, but it was so easy. I had to bend the upper tube towards the vertical tube of the vertical tail. I was really thinking hard about how to do it with moulds, but ... a clamp can do the job too. Amazing how easy some jobs are. 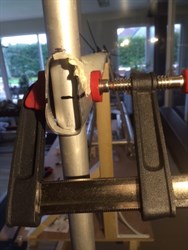