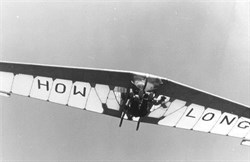 It was back in the early 1940's that Don Mitchell first became involved with flying wing glider design and construction. But WWII interrupted his research and experiments. The War's specific needs for large payload capacity and space ruled out the flying wing design and Mitchell's vision lost its place in aviation history. Then in 1974, with the advent of hang glider mania, the Mitchell Wing resurfaced. It was at that time Dr. Howard Long took an interest in the half-forgotten project and asked Mitchell to make him a flying wing hang glider. The result was the foot-launched Mitchell Wing and it astounded the world of hang gliding. George Worthington, holder of eight world records in hang gliding and author of the book In Search of World Records, wrote in the book..."I predict that the Mitchell Wing will be the highest performance foot-launced hang glider we'll see for a long time." He was right and it was from this preliminary design that Mitchell developed his later powered models. The B-10 and U-2 Superwing.

Thanks to jcoyier of the Rigidwing yahoo group, i found this video again in which a Mitchell Wing competes with a lot of different hanggliders. He is visible at 05:44 in this video. The video also has a Easyriser competing. 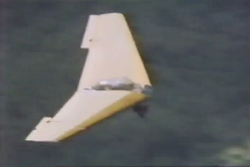 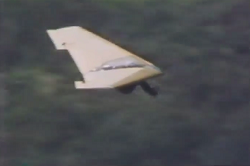 Here you already see that this glider is totally different from any other early hangglider. The pilot is nearly IN the wing. He looks OVER the wing. Control is by those surfaces just below and behind the wingtips trailing edge and by spoilers which come out on top of the wing (see next chapter). 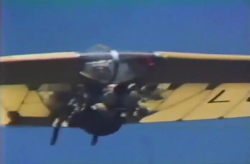 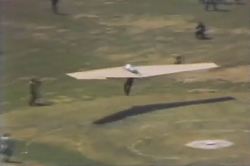 In this competition he overshot the target, which was very very hard to avoid due to the much higher speed of this glider. I was amazed by its speed when comparing it to the other gliders at this competition. 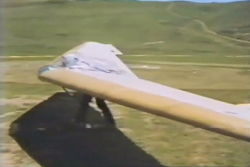 Although this construction is a wooden one, the glider is still light enough to be carried by its pilot.

These are stills of the video you can find more below. This is a note i recieved from towforce (Martin) of the Rigidwing Yahoo group: "For those who might not know...what made this Mitchel "rare" was the the pilot sitting into the wing, no tip rudders and had a set of boxed spoilers (can't recall if they linked for yaw control or not). I find it pretty funny the announcer suggesting he blew is landing.... I look at it as having pulled off a pretty good one give the crappy postage stamp he was trying to get it into ;-)"

If you look at this picture below, you can see the spoilers sticking out of the left wing. I guess they hinge upwards. they give some drag at the wingtip. This results in a yaw towards the wing with the extended spoilers. Also it breaks the air flow over the wing, which would result in less lift by that wing, which makes it drop and that leads to some roll towards the wing with the extended spoiler. So ...it should have both things needed to make a nice turn. But ...those things work fine ...when air speed is high enough. During take off it can go wrong due to the low air speed.

The next article, written by George Worthington, is a MUST READ when you consider making a Mitchell Wing with spoilers instead of wingtip rudders!!! It might save your life. 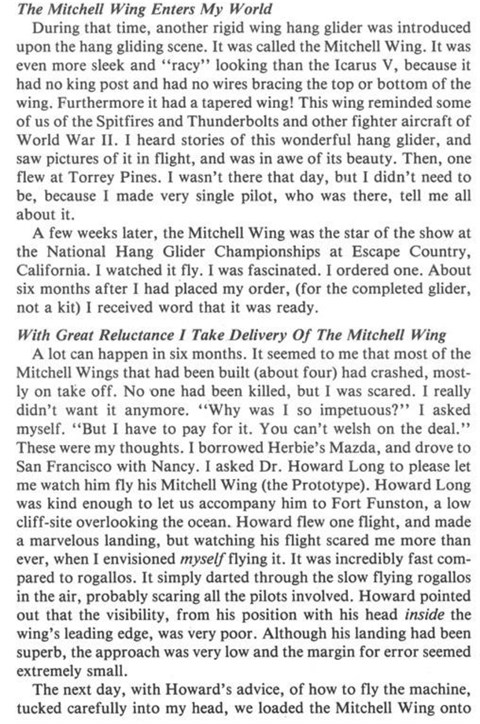 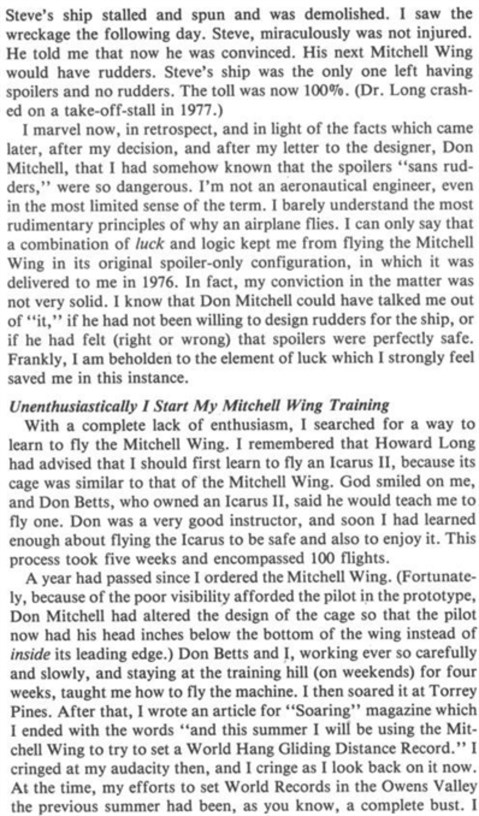 So ...now you know. Do NOT build the Mitchell Wing with the original spoilers!

I got a note from the team of Predrag Devic, who made the design of my own rigidwing (the BirdGlider):

"Read the post on Nest of Dragons about spoilers.

Interesting that we came to similar conclusion doing CFD for BirdGlider and the effect of spoilers. That is way we choose not to use them.

It was obvious that their effectiveness lowers as the AoA rises and that they can induce early separation when glider is on high AoA. That means that you could spin the glider when you are flying slow by applying roll command. Also roll/yaw response at high AoA would be low. So, vertical surface gives much better control.

One thing that can increase effectiveness of spoilers on high AoA is to put them both on top and the bottom of the wing like on Ho-229, but that increases complexity."

There was a response by Chuck Rhodes:

My name is Chuck Rhodes. I currently own Mitchell Wing # 3, the original FAI World Record wing that George Worthington set the first official world records ever in a hang glider of any type and 6 total FAI records between 1977 and 1981. I bought the wing from him in 1982 and have several hundred hours flying it as a hang glider and ultralight sailplane. I have not only foot launched it many times but have ground and aerotowed it as well.

Although its performance is not as good as today's Millemnium or Swift, it still has an honest 15-16:1 L/D and a respectable sink rate. It is an incredibly strong glider; Don Mitchell, the designer, and the one who built mine, said it he built it for 6g's positive and negative.

It is still an outstanding glider for soaring but like a lot of rigid wings it does have drawbacks. These are more difficult to transport than a rag wing and it is more difficult to repair if you do not know what you are doing. If your are familiar with its construction and building techniques it can be easily repaired in most cases.

As for flying characteristics, it is full 3-axis once in the air but on take off, if foot launching, you only use tip rudders and weight shift for pitch. The hang cage is set up very similar to the Millennium. Using shoulder straps to support the weight of the wing it is easily foot launched. In fact in high winds it is much easier to ground handle and launch than any rag wing. Using the stick to work the elevons to control pitch and roll the pilot can easily keep the wings level and neutral for the launch run. I have stood on take off in 25-30 mph winds totally controlling the wing on my own and then merely running a few steps forward into the wind and am off.

It does help to have 2-3 ground assistants to help you lift the wing up initially and get into the hang cage and shoulder straps however. For towing I simply sit in the hang cage ready to fly and let the tow vehicle pull me along into the air on the landing wheels that I have built.

The wing can enter a stall/spin if you are not careful in a slow turn and you stall the inboard wing. This can happen if you get your weight to far back in the hang cage and aft of the CG. Standard sailplane 3 axis control spin recovery works very well to recover however, provided the pilot has the altitude to do so. Don't stall in a turn only 100 over a ridge etc.

Building the wing takes about 500 hours depending on the skill of the builder but is not especially difficult. Using Carbon Fiber the builder can reinforce ribs, spar, and trailing edge etc. to add strength to the wing. I did so and mine does just fine. The original M-Wings made for non-powered flight weighed only about 80 pounds. Mine now weighs about 120 due to the extra weight of the streamlined pod around the hang cage, and the paint I used on the wing covering. If I recover it in the future I will not paint it and that will easily knock 10 pounds off. However the weight is no hindrance in foot launching as the wing is so efficient in lift even at 134 square feet that it flies its own weight in 2-3 steps in low wind and I have foot launched it in winds of less than 8 mph.

Overall it is a classic glider and still has great performance but with flex wings like the FUSION and the new rigids like the Millennium it would be better to invest in one of those if you can afford it. If not build a Mitchell Wing and I am sure you could get all the materials to build it today for under $2000.00

Some More info on the Mitchell Wing

* U.S. Pacific's website.
U.S. Pacific sells plans for the Mitchell Wing B-10, adaptable as a foot-launched hang glider or as a wheel-launched ultralight. You can also contact U.S. Pacific by e-mail or call Richard Avalon at: (650) 583-3665. 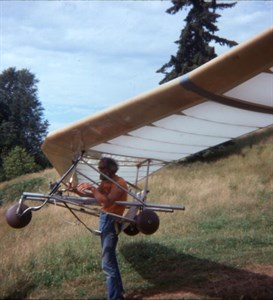 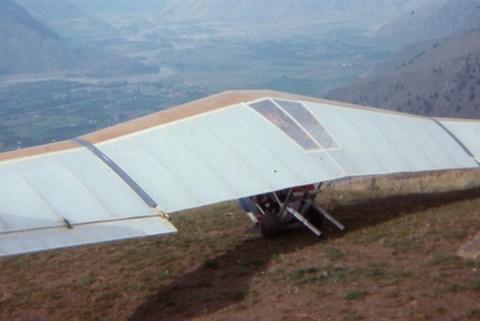 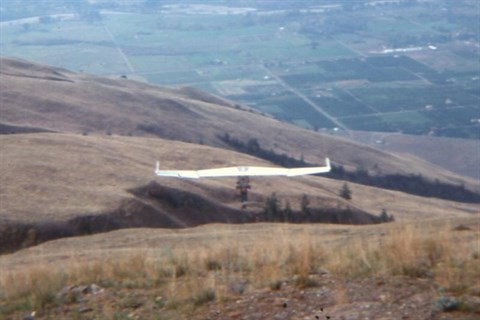 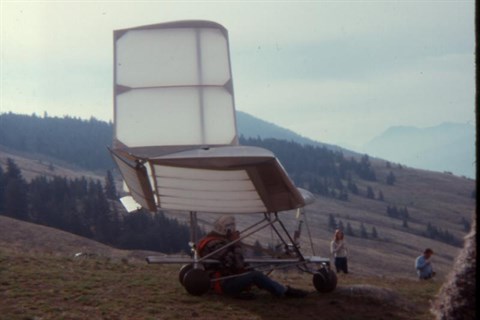 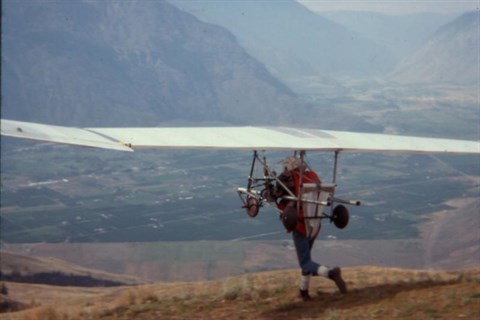 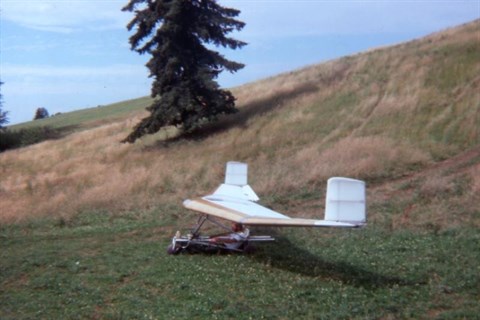 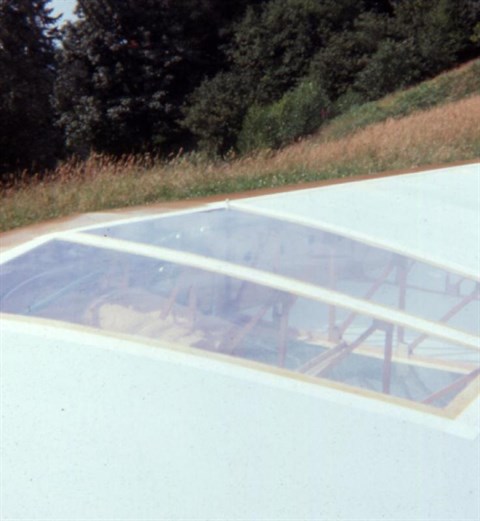 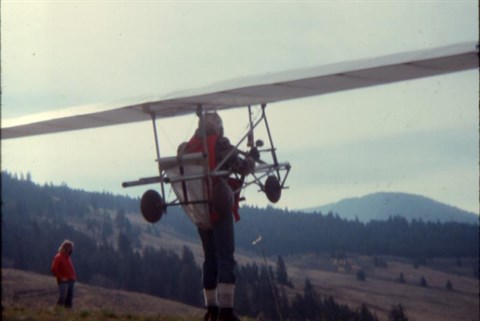 Comments of a Mitchellwing B-10 user 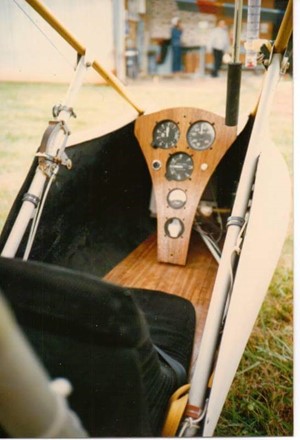 When i read about somebody having flown the motorised Mitchellwing B-10, i contacted him.

"Mike Peters, i just wonder. The Mitchellwing had a inverted steering stick. It hung from the wing downwards. How did it feel to use it? Was it confusing afterwards when going back to a normal stick?"

His reply: "Not really! The direction of travel is the same. It was quite comfortable, in that I could rest my arm on the diagonal cage support and control it with finger movements. Tip rudders did most of the roll work, though.

Lot of adverse yaw, if you used aileron only.

Very efficient flyer! Once, I was flying along with the KFM 25 HP engine and one of the spark plug leads came off. I didn't wire them, thinking that they weren't upside down, so they wouldn't come off. Bad assumption! Anyway, I flew home on one cylinder.  :)"

Mike:"The A-10 had a much longer stick on the floor which dampened the control movements some."

Mike: "The control surfaces were balanced on the B-10. They were counter weighted." 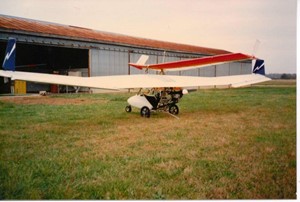 The most modern edition of the Mitchellwing was the U-2. Here you see a U-2 in action in a video.