february 9, 2015: I forgot to mention this about installing the skids. 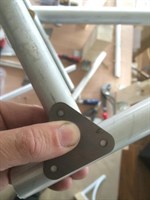 How to install plates just using your eyes.

Step1: place the plate so the holes are at the centres of the tubes. Label the center of one such hole.
Step2: drill hole THROUGH a single tube
Step3: insert bolt through plates and that hole. Place nut on bolt and make that both plates can still move a tiny bit under pressure (=knocking with small hamer).
Step4: line up the bottom side of the top plate with the tubes "visual edge". Label the position of the hole.
Step5: drill a hole ONLY AT THIS SIDE OF THE TUBE on that location.
Step6: insert a bolt and keep the bolt straight so the plate doesn't start to rotate around the first bolt. 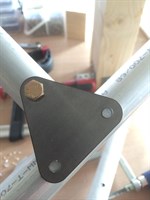 Step7: line up the edges of both plates. In one picture you see that the lines are not parallel. The next picture gives a better lining up. Drill hole in the last corner AT OTHER SIDE OF THE TUBE (side where the nuts now are)
Step8: insert a bolt at that side to prevent that plate from turning.
Step9: drill all the missing holes from the side of the plate. So ...NOT DRILLING THROUGH THE ENTIRE TUBES! You might mismatch the holes at the other side!
All holes are drilled now. Insert the bolts with the heads at the inside of the fuselage. The other side might hurt more if you hit it during running or falling. 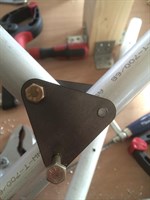 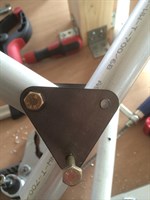 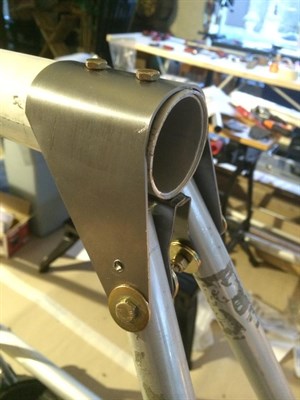 I just received a bunch of parts. Some are newly designed parts to replace parts i tried to use in the beginning but quickly saw there would be a problem.
Such a part was the tube holder between the vertical tube pairs. Making that part was pretty hard for the laser firm. They couldn't bend it at a good enough precision. So ...we made a new type of part there and ...all problems are gone.

I was fearing a bit the placing of the nuts on the bolts, but ...the design team did good work. The nut has just enough place and ...just using a screw driver to fill up the place between nut and plate gives you enough rigidity on the nut to tighten the bolt. Eeeeeeasy!

The end result is ...a super solid construction. The tubes don't move with me pushing or pulling sideways, forwards or backwards. Me super happy. Congrats to the design team of Predrag Devic! 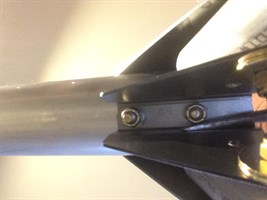 Ok, guys, i have not been building the last days.
1) Been busy with searching better suppliers to get better prices for the parts.
2) Did the basic design of a new website (just for the BirdGlider). I hope to see it active in the next weeks. Preparing to make some video's to better promote the glider at the Expo's i will visit.
This week i received the metal plates, so the laser cutter can make my last needed parts.
Once i have the building table done for the wings, i just begin with the wings. The steering system on the fuselage can begin once i have the newly designed parts in metal plates.
The alu ribs which could not be bend by the laser firm will be my main work once i have that bending tool at home. I expect to be able to receive it tomorrow.
Like i said before, i am waiting for some paperwork before telling a great surprise. I hope to receive it soon. If not ...i throw this idea into the group to keep this idea alive.

Made a working table just to drill holes in my tubes. Two larger beams (one as table, two halves as long legs (90 cm long), one smaller beam (as horizontal leg and machine support), a few metal angles to fix to the wood and ...done. Now, all my holes will be death center in the tube.
That machine i bought to cut the tubes becomes really handy. It can saw at angles. So it was super easy to cut those guides for the tubes. 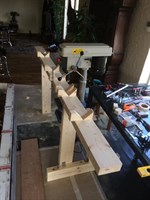 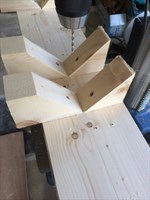 Ok, going to begin with making the table of the fuselage longer so it will become the table for the wing. Thanks to the smaller overal dimensions of the BirdGlider, i can build a half span on just two wooden plates. Those are here in lengths of 2,44 m (6.56 feet). 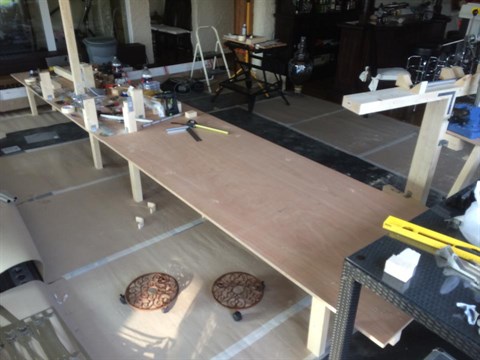 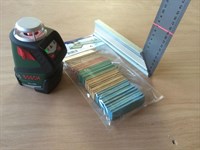 Next step is lining up the table. For that you need a laser (with levelling device), something with measuring marks that can stand upwards and ...those wooden things you can use when placing a laminate floor. I did the job in less than five minutes.

But ...take this advice! Go around the table TWICE! Placing the wooden adjustments might alter the height of the laser and that might undo your first modifications to the legs. 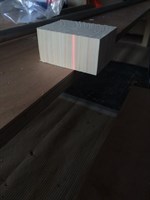 Last step is getting ONE long edge in line. I used a wooden block to see where the laser (this time is vertical modus) was. Some pulling left and right got it all right. Then is placed a connecting block beneath both table ends where they (nearly) touch. Yes, if i would have just placed the ends to each other, i would have had 1 cm deviation at the end of the table. So ...RESPECT THIS LAST CONTROL! And ...don't forget which one you checked. This is now your reference for placing marking on the table for the wing tube placements.

Euh ...super last task ...cleaning up. Man, what a mess i made. I need to vacuum the room a bit and replace some stuff to be able to walk around the table. This last task also keeps the lady in the house happy.
Tomorrow i go build the wing. Yihaaaaaa! Curious what time it will take to do the general shape. Sadly ...i don't have yet the cables to keep the tubes in perfect rectangular shape.