Hard lesson learned. The kit needs a cutting guide. I was so enthusiastic when started the build-up of the fuselage, i cut the long 2" tube which was meant for the front spar of the second wing. Oh boy. What a mistake. Ohooo, tube supplier, you have more of that???
But i guess i can construct a single wing the next week. I will fill the rest of the week with constructing the struts at the same side. So ...i will be able to assemble a wing onto the fuselage at the end of the week. Let's cross our fingers.

I also found a few tools that make gives a smooth edge on the tubes a real easy task. Those round tools have at one side a internal tool and at the other one the outer tool. The red thing is super easy for internal edges. Getting a tube ready is no longer endless sanding. Now it takes just a few seconds and done. 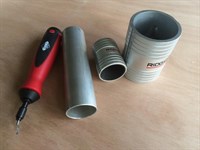 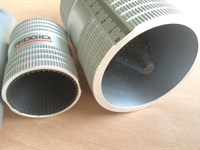 All spar tubes with their sleeves (just missing two sleeves) cut to length.
Progress was a bit slow today. Had to check some stuff to avoid making the same mistake as before by cutting a tube that was not meant to be cut. 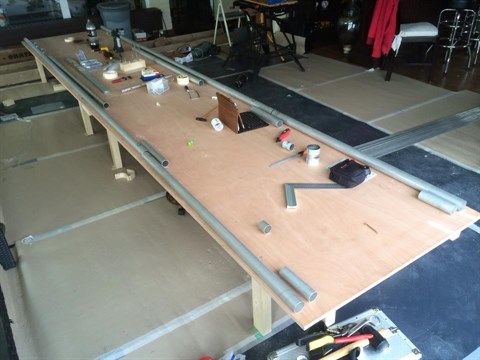 Amount of working hours: 2. But half was checking the 3D model to be sure i cut the right tubes. A cutting guide is a better tool than expected. It will become the first step in the construction of everything. I add one hour as honest real working time. 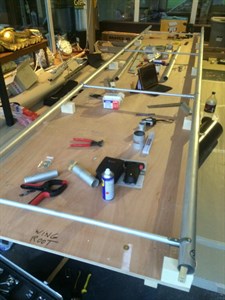 The basic wing structure has been done. But ...i need to redo it. I made a silly mistake. A good lesson learned. It will never happen again. Let me explain.

I was a bit on a time pressure as i was expecting a reporter of national newspapers. Mistake 1. Never work on time pressure.

I drilled the expected holes and was looking forward to a quick assembly, because the type of assembly here is really really really super easy. But ...the parts did not fit like i wanted. The tubes between the spars were not lining up nicely. Something was wrong. I knew at that moment, there could only be ONE source. The drilling of the holes in the spars. And yes ... i found the reason.

The picture of the drilling machines bottom shows the problem. The drill was no longer lined up with the center. DAMN! I solved the problem with two heavy clamps. This problem will NEVER happen again. 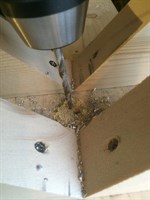 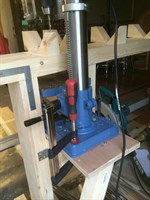 OK, what did i do to make that the assembly would have been very quick. I placed the spar tubes on blocks, because the supports also are fixed to the bottom of the tube. Small wooden parts are used as stops. Lining up the tubes is now super easy. Placing the parts that hold the connection tubes between the spars is no problem. Then you simply slide the tubes between the supports at both sides, line up and ...drill by hand. Just make sure that the tube doesn't slide while drilling. 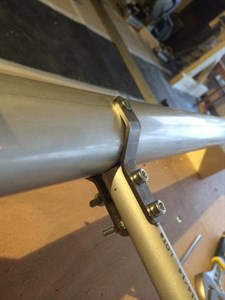 Oh yes, i am out of aviation bolts, so i use DIY bolts at this moment. Once the right bolts arrive it will be super easy to get them installed.

So ...for the wings to finish i need to wait for the arrival of the replacement parts and the bolts. I can begin the construction of the struts and the horizontal tail while waiting.

The visit of the reporter was fun. Man, this guy was really surprised with my plans. He never expected to see a type of airplane inside a room.

The article will appear in the newspaper of Wednesday. I am curious.

Added working time:
1 hour to get the working table like i wanted.
3 hours tube drilling/assembly of which 1 hour was finding/fixing my problem.
Lets say that i will note it as 3 hours real construction time.

Does anybody know what the rules are about placing a newspaper article on my website? Don't want to violate copyrights.

Flaps and tails have mutiple alu profile for quick assembly. The laser firm could not bend them. "Not possible", they say. I bought a bending table and tried myself. Result was like the firm said. The lips touch the tool when you do the last lip. 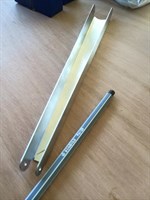 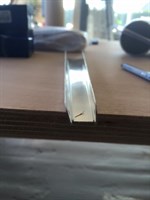 I went looking for a solution. Many times the solution is called "Tim Biesemans".
Result: next week i have a modified tool which will be absolute the tool for all my bending.
Because i see not all able to make this modification i see it needed to offer the alu plates already bend. It will be a quick step forward in the kit-building for the clients.

While i search for better and cheaper materials, my design team works on the assembly plans. My experiences withthe build-up will be added to the paperwork. 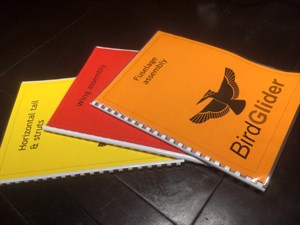