The Apex is a foot-launchable rigid wing hang glider designed by Danny Howell, similar to the Exxtacy and the Pegasus . It was not put into production.

Heh! For all of you rigid wing fans- I just saw the Apex fly at Crestline today! This comes less than one week after helping a Swift to launch in the Owens. Hmm. There must be some kind of rigid wing convergence going on here!

Anyway (not knowing much about these craft) I would say that the Apex is much closer to a hang glider than the Swift. I don't know what it weighs, but it seemed much easier to foot launch/land than the Swift. It looked pretty cool. It has a 42' span and short chord giving it about a 10:1 aspect ratio. It was buzzing around pretty effectively in the abundant lift. It has a D-tube structure at the leading edge and dacron at the trailing. Unlike the Swift, though, the leading edge is not structural. The D-tube stops short leaving a fiberglass fairing to absorb the impact of an ungraceful landing. I bet such a bonk would be expensive in a Swift. Anyway, it was fun chasing it around the sky.

From: DavidRSw [SMTP:davidrsw@email.msn.com]
Sent: Friday, May 01, 1998 8:09 PM
To: 'Rigid Wing Digest'
Subject: Status of Apex rigid wing project
Last Labor Day, Danny Howell, the designer of the Apex, offered me the use of the molds to build another Apex. They had been stored in Mitch McAleer's workshop for the previous 2 years. With the help of Mitch and Roy, we were able to move the wing mold clam shells and the spar tools up to Roy Bailets' hanger in Mojave. Danny & I have been spending more time on the Light Hawk Light Sailplane project lately, so the Apex has been sitting. We have been able to get a few things done though. Floyd Fronius is currently machining the redesigned root fittings that will allow the wings to fold in the usual hang glider fashion and carry the loads of the 42 ft. span in just 16% chord D-tube. In the next 2 weeks we will have the final lay-up schedule done and wing molds prepared for the skin lay-up. Roy & I should be able to schedule this within the weekend following the mold prep. Fungus is really hard to get that perfect finish...;-))

This new Apex will have the same 42 ft. span with rudder tips. Danny always wanted to put some spoilers on the upper surface near the tips, just like the Exxtacy has. We can do it with 5 sq. ft. in each spoiler. I will cover the entire wing (including D-tube) with Poly Fiber P-106 fabric and 2 light coats of Poly Brush. The smaller and lighter D-tube will still have a forward and aft spar. Spar caps are pultruded carbon bar stock. These changes have resulted in a calculated 80 lb. glider. The orginal Apex had a 135 fpm minimum sink rate and the spoilers will make it easier to turn and ground handle. The Exxtacy is very easy to launch compared to the original Apex. The Apex wing alone, without a pilot suspended below it, has a calculated 28:1 glide. The pilot will lower it to around 18:1. So who has the drag butt? Oops, drag bucket!

After this first new Apex, I'd like to have Roy build more, for whatever they will cost him in materials and labor. No, don't ask for one just yet. I'll let you'all know what it costs me after I get this first one finished. Does anyone know how to get more than 24 hrs. out of a day?

The Apex is in Mojave and the Light Hawk is in Lake Elsinore. Each are 90 miles from my home. Some weekends show close to 400 miles traveled without a minute of air time. This has got to change and soon. The original Apex had some damage after a truck tow ended with the Apex upside down and still attached by the nose safety line. One rudder damaged which Chuck Rhodes rebuilt and the tow rig frame bent beyond repair. How would any of you like to take a truck tow ride in a glider with the safety nose line still attached?

Considered up to date... 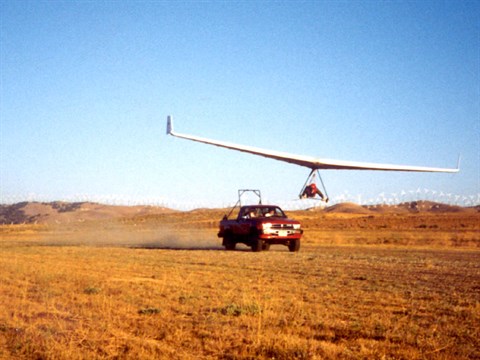 Here is a picture of the Apex designed by Danny Howell. It was built by Danny Howell, Monte Westlund, Lonnie Fiester, Mitch McAleer, & Floyd Fronius, to name a few. This picture was from a hang gliding web site about towing. He didn't know what the picture was. The Apex is flown by Floyd Fronius. Dan Armstrong is towing him at the Mountain Valley Airport in Tehachapi, CA in Sept. 1998.