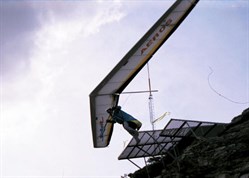 The Aeros rigid wing, the Stalker, is a hybrid rigid-wing model made by Aeros in the Ukraine. It is similar to, and obviously influenced by, the Exxtacy and the ATOS. However, like the Millennium, it is aileron-controlled, rather than spoiler-controlled.

A tremendous work has been done. Stalker Rigid Wing has been embodied already. It was extremely different from existing types owing to a number of advanced design solutions, namely.
The main thing is control in roll and lateral control through ailerons as well as pilot's weight shift control. Flying Stalker one has the same feeling as flying a hang glider. High control efficiency.
Smooth wing D-spar not covered with dacron. Elementary calculations show 0.5-0.9 points improvement in glide ratio quality. (See the chart).
Rigid specially shaped tip secures minimum inductive resistance within the wide speed range. A wingtip does not warp in flight, and due to this the predetermined lateral profile twist angle is preserved at all flight modes.
Aileron alignment angle changes in flight, thus reducing power on the speedbar at high speed. This causes increase in speed range, better lift-drag ratio at high speed.
Wing flap and aileron are an extension of a wing profile. There is absolutely no gaps and steps between them and the wing profile.
This glider possessed all the best characteristics of this type rigid wings:

Results of a prototype flight tests have shown as follows.

The wing is easy-controllable. Adverse yaw has not been detected. The glider enters and recovers from the turn easily, on the turn it rotates steadily at any lateral angle

Takeoff and landing are extremely smooth even at complete calm. At takeoff the wing starts flying immediately, being obedient to the pilot, and easily reaches takeoff speed. At landing it is necessary to maximally reduce speed and after this to push the speedbar. The glider will land at once without nose sinking. Most important is not to push the speedbar too early.
The wing is quite stable and controllable at towing, it is not difficult to tow it at bumpiness and to fly with any towing device at speed range 50 - 90 km/h.
Stalker picks up speed very easily, provides a steady flight at high speed. Efforts on the handle are not big. During testing speed of 130 km/h has been achieved, and this was not the limit. Besides, there were absolutely no speed bumps. Minimum speed with a completely deflected flap was 25 km/h.
Minimum sink rate with the flap 10 - 15° was 0.7 m/s. This is almost equal to estimated data (see estimated polar). Spiral sink rate was 0,9-1 m/s.>

on Feb. 16, 2001:
"I got a chance to go to the hang gliding and sailplane EXPO at Indianapolis. Got to check out the Stalker. It's a nice looking wing. I was very impressed with the overall quality and craftsmanship of this wing.

As you know they have added an extra control surface to deal with the adverse yaw. They call it a spadd. This is an effective way to control adverse yaw. The same idea is used on the Genesis and the Monarch and several other aircraft. Although it goes by several different names: tip spoiler , tip rudder, drageron, spoileron, drag thingy, it does essentially the same job of adding extra drag to the upward deflected aileron side.

It's definitely more efficient than having a 6' spoiler open half the time. Of course, for real roll control it's hard to beat 6 square feet of rudder 90 degrees to the airflow on your wing tip. I'm sending you a picture of the stalker.

Alejandro Gonzalez, wrote in the OZ Report, v.3, no. 127 to tell what he knows about the Stalker at this point:

On the new Aeros - well, there were certainly no incidents in dozens of test flights performed so far. All testing is being conducted in a very systematical way, following a rigid flight envelope expansion program.

In my opinion the most shocking results were obtained during wind tunnel quantification and comparison of control losses between traditional spoiler and PIAC aileron control systems. (Old connections and a unique situation in the country gave them access to multimillion dollar facilities like Antonov - Tsagi software, wind tunnel, and some very qualified personnel.)

Another significant results of this by far the most expensive part of development program was the performance difference obtained after adjustment to real elliptic lift distribution and PIAC, original and quite simple Proportional Integrated Adverse Yaw Compensator. I understand they will apply for a patent on it.

Right now the wing is redesigned in order to get the weight down to the best in the market. It took a lot of time, some pretty expensive materials and a pile of broken D-sells. Several mould sets are in production in order to avoid the usual production bottleneck after launch.

I think they are far behind schedule but making an interesting machine that will change the market.

On the point you make on aileron control on rigid wings, WITH dihedral (look at the Stalker picture [above] - do you see any?) and without rudder - (see same picture):

I think you have seen enough top HG pilots, with all their paranoia on drag, shaving decimals from wires, enclosing instruments and even hanging themselves on ridiculously thin wires in order to lower the drug. Are you seriously suggesting, like some RW manufacturers, that after doing all this, the most efficient way to turn your glider is to stuff 1.5 meter (5 ft) long plate in the high speed stream over your wing just because it is too complicated for them to mess around with a decent control system?!

Imagine what would happen if somebody would try to design from scratch a modern flexible hang glider within the time and money constraints of a normal commercial development program. The only possible (and correct in this circumstances) conclusion would be that it is impossible to design a glider that would have enough control without ANY control surfaces! It was only possible after some hard work.

In my opinion, spoiler control to the R.W. is something like open crossbar to the H.G. and it will not last.

Here is its first take-off.

According to Aeros all went as expected. Notice the use of trailing edge ailerons instead of spoilerons.

I went to St-Hilaire and saw the new Aeros Rigid, I just had come out of lurking and post:

Let me start by saying, I don't work or sell Aeros, and I fly a Mill. The Aeros rigid was simply a show stopper and the one thing at I St-Hilaire had to share.

WOW, I wish my Mill was half as well finished. The leading edge would qualify to be put on a standard class glider: it has a mirror like finish. The remainder of glider was just as good; I was blown away! (the pictures in the link above don't do it justice)

The glider has trailing edge ailerons and flaps. As I found out, These are not attached to the trailling edge, they are a part of the trailing edge. The whole thing just simply looks slick .

The control mechanism for turn had me worried at first. It is a spring loaded pivot at the hang point. So what happens when no weight is present, like in those momentary 0g (or less) flight times we sometimes experience? I was told: since the mechanism is spring loaded, at no-load the glider is automatically put in a stable flight configuration (hmmm.... ) I went back to the spoileron and no G discussion on this post, and am now convinced the control mechanism has to be just as good as spoilerons, except at launch (those first few steps oughta be interesting).

Only one doubt remains in my mind: adverse yaw, how will they control that? Aeros told me they still have a lot of testing to do (I bet). But from what I saw, I am sure they will pull it off.

Some More info on the Aeros Rigid Wing

From: The Oz Report, Vol. 3, No. 16
Date: March 17, 1999
G.W Meadows, the US distributor for Aeros glider, the manufacturer of the Stealth glider, writes to provide us with the latest specification for Aeros' new rigid wing glider. G.W states that it has tapered Carbon D spars, a tapered wing utilizing ailerons (differentially activated with additional methods for adverse yaw), "hook in area" control mechanism (perhaps G.W. will tell us what this means), and "firm" side wires that actually are structural.

The Aeros folks have provided him with a number of 3-D renderings of the new glider, taken from CAD drawing. We've included one here.

Some pictures of the Stalker/Stalker 2 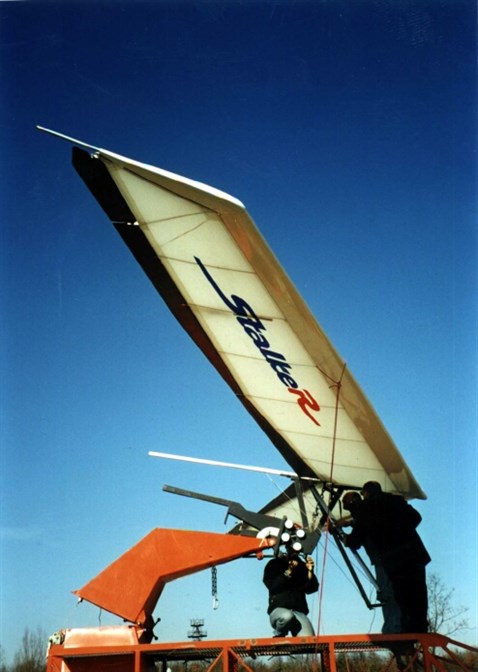 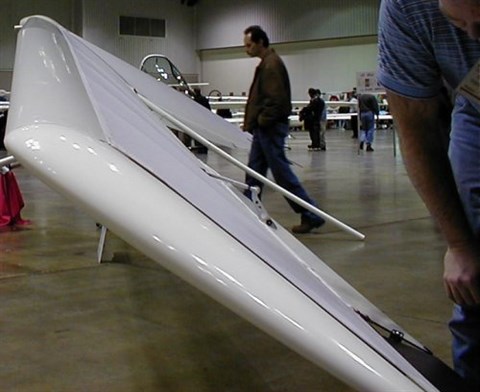