The Sundog is a 2-axis-controlled hang glider designed by Michael Sandlin.

Said Michael Sandlin about the design: "Sundog was a rigid wing I built to test the usefulness of flaps on a hang glider (see Hang Gliding, February, 1991). This version has full span flaps which fold under the wing for transport. There are spoilerons on the top surface of the wing for turning, actuated by side motion of the hang loop. The flaps were pulled down by a rope, just like the modern D-cell rigid wings of today. The tail surfaces are just fixed stabilizers. It was too heavy (90lb.s) and the static balance was non-existent (special launch procedures required), but it was fun to fly once you got it in the air. Full span flaps allow simple, easy landings, very similar to a drogue chute.".

You can read more about the Sundog and other designs by Michael Sandlin at his website. 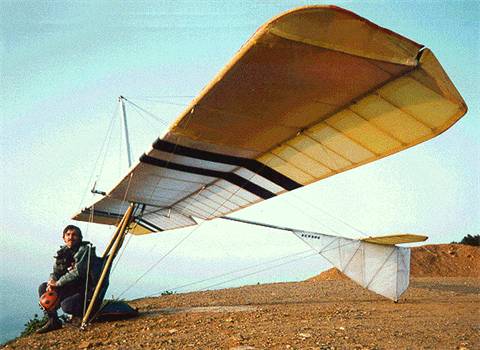