All i have about this prototype is this picture. All info is very very welcome. I guess it is a design by Jim Marske. 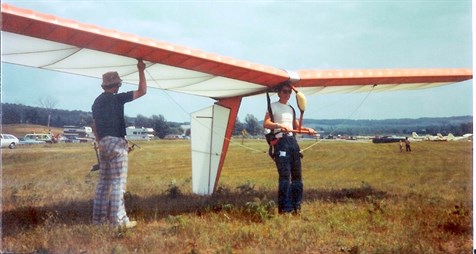 "Viceroy 1976" is the title of this picture, which i got from Jim Marske.

I got this first response from Rich Childs of the Rigidwing Yahoo-group:

"Your unknown rigid wing is the Marske Moth (editor Koen: later Jim Marske gave me the real name "Viceroy") from around 1975-'76. There was a shop in Farmington MI on Shiawasse Rd at that time that had a copy of this wing. If I'm not mistaken, Jim Marske was working there prior to heading to Ohio.  I don't know if any were ever sold.  I believe I first saw it at Frankfort, MI in 1975, although we did not see it fly.  Somewhere in my files I have a promotional flyer with data on it.    It seems like the Monarch may be an outgrowth of this. "

"Hello Koen:
Some people have refered my hang glider to Moth.  I take offense to that.  Its actually named "Viceroy" which is a small butterfly that looks like a Monarch butterfly.  It had a rectangular wing, (1.85 x 10 m.).  Weight was 36 kg.  Wood wing structure and welded steel tube body and tail.
I was only able to make two flights off the sand dune before winter set in.  It did fly well.  The following spring, the mice had infested the wing and ate some of the styrofoam ribs.

The Viceroy, due to its large wing area (18.2 sq m), required a trailer for transport.  I could only fly it when the wind was from the right direction and within a flyable speed range.  Conditions were seldom flyable when I had the time to fly.  Without ailerons it was difficult to keep the wings level in gusting winds from varying directions. A wing runner was required.  From there I developed the Monarch which was the real answer.  I can now fly in zero wind and from any direction.  I can launch from hills or flatland.

Monarch G's are currently being built and delivered.  We have recovered the molds from Canada and we are back in production.
For more info, go to  www.kollmanwings.com .
Jim"