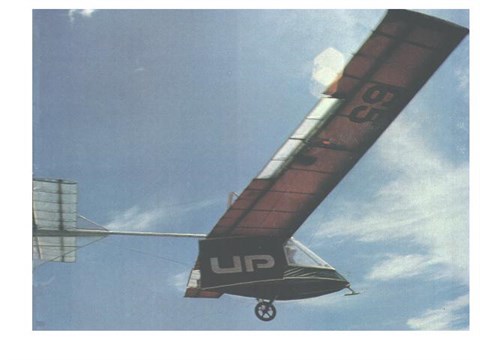 Arrow just after launch in the Owens Valley of California

The Arrow was a three-axis foot-launchable ultralight sailplane designed in 1982 by Ultralight Products, a hang glider manufacturer in Temecula, California, also the designer of the famous UP Comet hang glider. While a technically interesting development, it was not a commercial success, being a few years ahead of its time. It seems that the general hang glider population of the time saw the inconvenience of the weight and setup hassles as more than offsetting the performance advantages.

The Arrow took 4th place at the 1982 Owens Valley Cross Country Classic piloted by Eric Raymond. At this meet, the glider was allowed to completed with other flex wings, and showed a large performance advantage. However, Eric did not win the meet because of a tactical error on one day (though he won three other days).

In June, 1985, Peter Brock, president of UP, said in an interview for 'Hang Gliding' magazine: "We put a lot of time into developing the Arrow, and it performed real well, but there are a couple of reasons we have not put it into production. First of all, its setup time is over an hour --. it's not a glider to fly unless you're planning a major XC event It also proved to be difficult to foot-launch. It became obvious that the only way to get it up was to tow it which wasn't legal until October 1984. The FAA just suddenly decided it was going to be legal so now we have a product with a tremendous amount of potential."

Dan Demaree: "What method is best for towing the Arrow?".

Pete: "It can be towed by an automobile, an ultralight, or an airplane."

Dan: "So it will actually go fast enough for a Cessna to tow it up?"

Photos of the Arrow

The following photos are reprinted from the September, 1982, edition of the USHGA 'Hang Gliding' magazine, and are © Pete Brock. 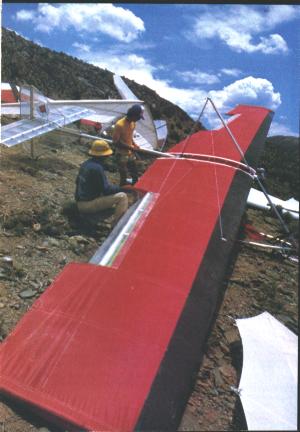 Arrow being set up in the Owens Valley of California