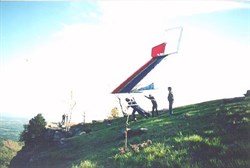 The Raptor is essentially inspired by the Manta Fledgling, that is, it is a lightly swept flying wing design with tip rudders for roll control and weight shift for pitch control. However, unlike the Fledgling, it uses a composite D-tube and ribs (folding in one version, non-folding in another), and the airfoil is that of the Marske Monarch .

The Raptor project is alive and well. I spent this winter producing hard wing kits. The collapsible Raptor has been put on the back burner for now. I currently have enough interest in the hard wing kits to keep me busy for a while. After al, I produce glider kits at the alarming rate of one every 3 months.

The Raptor2 hard wing is the same wing platform that you flew. The big difference is the wing doesn't collapse. The ribs are bonded to the d-tubes. The wing is covered with dope and fabric or Tedlar.

I've made a few changes from last year's glider. The keel has been extended a foot to increase yaw stability. I lengthened the keel on the glider you flew after I got back from Florida this moved the keel fin farther back. It seemed to eliminate the yaw oscillations. Several pilots flew it with the longer keel and none of them experienced any PIO's.

The big difference in the new design is the strength. Since the hard wing can use lighter ribs and eliminate the weight of the sail it can be made much lighter.

I used a few pounds of this weight saving to increase the strength of the spar. The result is 75-lb wing capable of carrying 350-lb hook in. I did this so I can experiment with this wing on a lightweight trike.

I also have a lightweight trailer in the works to haul the wing. The trailer will require a couple weekends to build and cost under $500. There's more to come on this wing and I'll keep you informed. 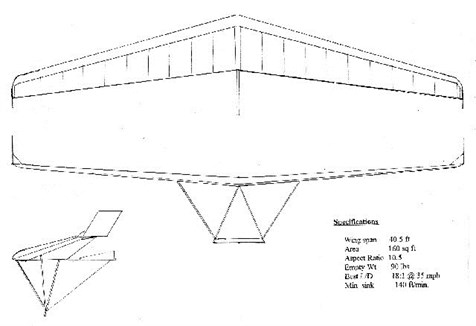 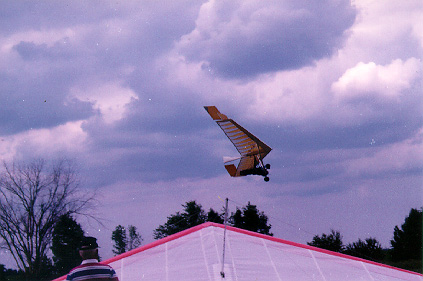