Recent years have seen the passing of a number of notable pioneers, and my world seems to be emptying out on that account. I'm real happy to have met some of them (like Don Mitchell, Jim Maupin, Molt Taylor, Witold Kasper, all gone now). I did not meet Volmer Jense;, I let it slide figuring it was just a matter of time. Silly mistake.

In light of Gary's post about Volmer's passing, I'd like to offer the following tribute from my Rigid Wing Reader & Ultralight Sailplane News, Issue #12.

Volmer Jensen - More Than An Icon
An institution in sport-aviation!

Once in awhile, it's necessary to put things into perspective. There are four generations of ultralight pioneers. The prehistoric age is characterized by legendary mythical figures such as Icarus & Daedelus. A neolithic age follows, and finds dreamers struggling to get airtime. We look to Leonardo Da Vinci, Otto Lillienthal, Sir George Caley, and others like Montgomery and Chanute as being representative of this neolithic era.

The pre-modern era began with the Wright Bros., and we see designers and builders beginning to utilize more practical airframe technologies. This era lasted right up to the beginning of practical hang gliding a couple of decades ago. Today's modern era (unless you are reading this two decades from now, in which case you are in the post-modern era) is an age of new desires and expectations, materials and computers, and hopes for a future with many choices for comsumers. We are still discovering pioneers in the modern age.

One designer with his feet firmly planted in both the pre-modern and modern eras is Volmer Jensen. Fully as important as his designing and building accomplishments is the fact that he has turned his designs into sources of revenue, which might be the greater accomplishment given the fact that only a handful can and have been doing so.

Volmer was easily a quarter-century ahead of his time. A self-taught engineer, Volmer designed his first glider at age 16 in 1925, and has about two-dozen designs under his belt over the following half-century. During WWII, he built the VJ-11B hang-glider, a bi-wing craft with full aerodynamic controls intended to be flown off hills in that time of powered flight restrictions, proving once again that necessity is the mother of invention. Volmer Aviation still makes plans for this glider available for $50, complete with blueprints, photographs, and full-size rib layout.

Later on, in collaboration with Irv Culver (whom I have previously described as "the designer's designer"), Volmer designed, built and sold plans for two more rigid-wing hang gliders, the VJ-23 Swingwing , and VJ-24 SunFun . These gliders astounded early-days hang-glider pilots with soaring flights at a time when 3:1 glides were the order of the day, and thermals generated fear among the paisley-pants/long-hair/bamboo-pole crowd. Irv Culver was quoted in Soaring (Nov. '72) as having said, "I've had more fun working with Volmer on the Swingwing than I had when I designed and built the Lockheed X-7, the first Mach 4 flying machine."

In the video below Volmer is visible from 06:39

Click the scan below to get to the full article about the VJ23. 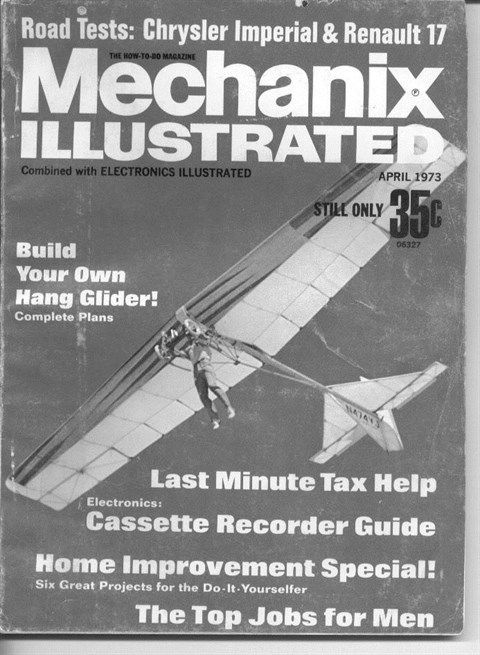 These two pictures are from a meeting at the Wasserkuppe in Germany in 2003. 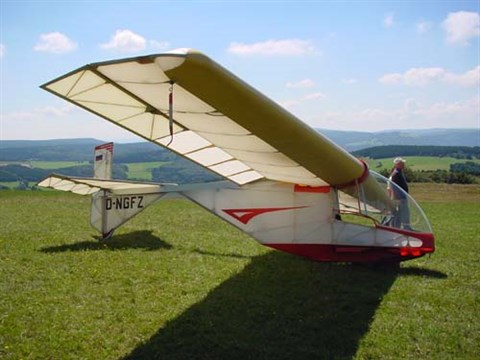 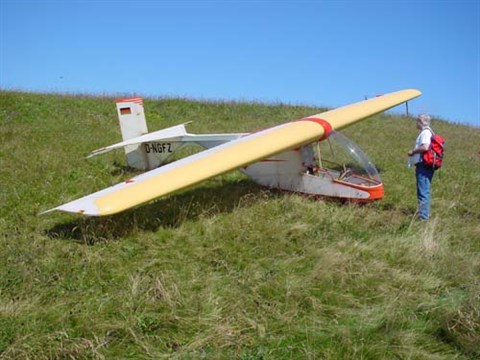 Here is a test of a VJ-23 with a electric engine.